For someone who had no real drive to paint dragons, the last couple years have forced me to get into them in a fairly large way. Lots of drawings, a few paintings, tons of discussion and analysis (not to mention many a headache) was the result. But if I ever thought that my time worrying about dragons was done at the end of the Tarkir block of Magic, boy was I wrong. In terms of preliminary drawings, color studies, the number of images pulled from the internet for reference and total man hours, this piece represents quite an investment in still more dragons. Or rather one dragon. The Tyrant of Valakut (Intro Pack Version).


ART DESCRIPTION:
INTRO PACK
Setting: ZENDIKAR
Color: Red creatureLocation: top of a cliff (use pp. 43-46 in the World Guide as a starting point, but make it your own)Action: Show us an immense dragon perched on a rocky cliff. See the dragon on p. 163, but remove the back protrusions. This dragon is thicker with several sets of tusks that protrude from its lower jaw. Its wings are unfurled, as it stands triumphantly over a medium sized dead Emrakul-lineage Eldrazi spawn (see pp. 228-230).
Focus: the dragon
Mood: Raw power. The uncontested master.

After soaking in the information from the description for a bit, I started doodling in my sketchbook in an attempt to grope my way toward a solution of some sort. Having to revise the design of the dragon a bit was an interesting challenge and I tried to remain fairly true to the spirit of the original while making the necessary changes and adding my own flavor to it. Here's where I started to figure stuff out: 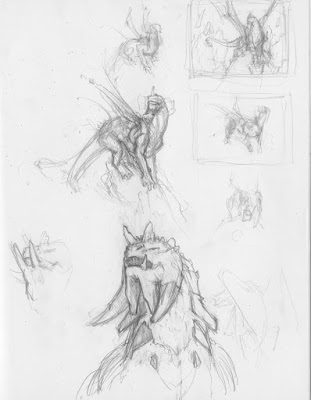 Once I got to this point, I move to Photoshop for the sketch.

The Art Director seemed to like it and gave me the go ahead. Before going to paint, however, I went ahead and did a color study. 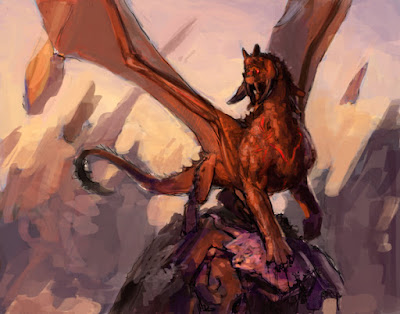 As you can see, elements of the background began to change a bit. I found that as I filled in those large shapes with color, they began to feel uniform and a bit boring. In the end, I felt that breaking those shapes up really added a degree of interest to the piece. Still, I wasn't totally happy with it and showed it to a group of compatriots. They gave me some input and I tweaked it a bit. 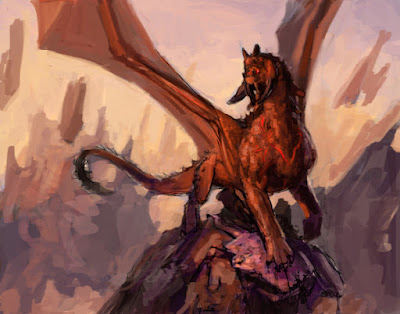 A bit more broken up and a greater variety of direction in the floating mountains in the background. I was getting closer. I showed the revised version to my friends again and they had a few more thoughts. more changes were made and I settled on this: 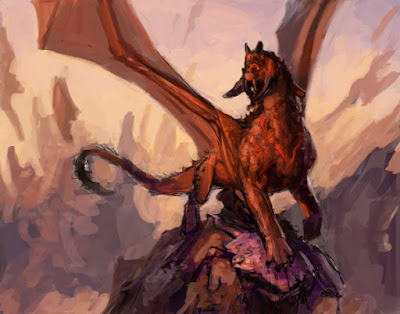 I knew that things would likely change a bit more over the course of painting the piece, but I felt like I was in pretty good shape nevertheless. So, I transferred my drawing to the surface and went to town.

As you can see, the piece became darker in the paint. This is largely due to my love of a heavier palette and the fact that I felt that the background was a little too washed out in the sketch. As I developed the painting, the darker background called for a darker dragon, as well. The added bonus of this was that it became easier to sell the molten crags in the dragon's skin. The downside is that piece isn't quite as luminous as it was in the sketch, and the overall lighting scheme shifted quite a bit. Such is life.

Painting this large for Magic is a tough thing. Inherently, a lot of detail is lost and the printed image fails to do the painting justice. However, as long as the piece reads okay at card size, that tends to not be too big a deal—at least for the purposes of the client, that is. For my purposes, I was just hoping to make a cool painting that had a degree of presence in person. I think I accomplished that. Still, I think it's apparent that this piece might fall outside ideal size for my Magic work. I'm beginning to feel that outside of landscapes, 18x14 is about as big as I can go without losing too much. That's not to say that I won't ever go this large ever again. In fact, it's likely I will should the right piece come along. Whatever the case, this felt like a worthy opportunity to go a bit bigger and it's an experiment that I'm rather happy with. 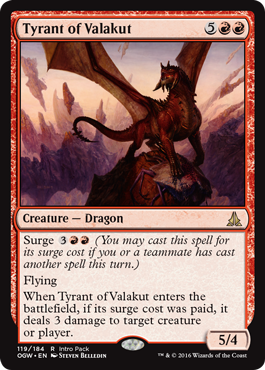