Herald of the Fair

As with every Magic expansion, there is a story that goes along with Kaladesh, and that story centers on an inventors' fair. Machines and contraptions of all kinds are on display and the world is abuzz over the new technology on offer. Standing above the throngs of citizens eager to take a gander at the latest and greatest devices on offer stands the the Herald of the Fair. Equal parts salesmen, town crier, and circus ringleader, he directs the masses and keeps them abreast of each day's events. At least, that's my take on him. I'm sure there's a lot more to him. Or not. But for the purposes of the depiction I was asked to make, that's about all I needed to be concerned about.

The vast majority of illustration work I do for Magic requires little in the way of really deep thought or conceptualization. Many of the images I create can simply be boiled down to figuring out what elements need to be included (often times this is made clear in the art description provided by Wizards of the Coast—complete with reference images or styleguide page numbers that lead me to those reference images), figuring out the priority of those elements (this is usually pretty clearly indicated by the aforementioned art descriptions), arranging those elements in a way that I (and hopefully the fine folks at Wizards) find interesting, and finally making the image. Most of the time, all I need to know is in the styleguide. Sure I'll supplement that with additional reference imagery that I dig up or photograph myself, but the vast majority of the design choices are already made by the time I get my assignment.

Herald of the Fair is no different from such cases and thus is as simple as they come. The art description (which again I failed to save), asked for a man standing above a crowd of people beckoning them to enter a large building or arena to see the wonders of the fair. He needed to be speaking into a device that amplifies his voice in some way. Images of how he would be dressed were provided (though I got to make a few minor aesthetic choices), and his location was also made clear (though that ended up being a bit more generalized for the purposes of the piece).

Taking that art order, I looked at the various pieces and assembled them thusly:


Despite lacking any kind of detail in the crowd, this piece was approved.

While I don't do this all the time, in this case I printed the sketch out as a monochrome image (I think it was reddish-brown) on watercolor paper. I then take that printed sketch and paste it down onto a piece of hardboard. The printed sketch is then sealed with several layers of matte acrylic medium which I'll sand down when dry to a relatively smooth surface. Then it's ready to be painted on with oils.

Here's how the painting came out.

One will note immediately that there are some obvious differences between sketch and finish. For one, the herald now has a sash. I think he was always meant to, but I'd forgotten to put one on in the sketch and the Art Director somehow missed it. I ended up double-checking with the Art Director in the midst of painting the piece and learned that my suspicions were correct, so I included one. Additionally, there are some minor architecture changes in the background that I felt necessary as I fleshed the piece out (a better way to put this might be that I made the scribbles into architecture). Beyond that, I ended up tweaking the herald's pose a bit to make him a bit (mostly the hands) to push him a bit more toward performer. Pretty nit-picky stuff, but I somehow felt it all necessary at the time. 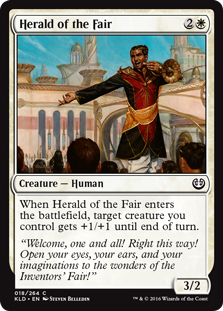 Anyway, as with much of my work I handed the piece in and sort of forgot about it. The painting sat in my flat files for about a year waiting for the set to be revealed. When Wizards of the Coast began to ramp up promotion for the set, I was surprised and amazed to find that the herald was featured in the set's video trailer. Not only was he featured, but he moved and talked. Pretty weird to see something I've done come alive to that extent. And a little unsettling. But hey, I'll take it.