For the collectors, players, and fans of Magic: the Gathering, months separate the release of one set from the next. For the artists, that separation simply doesn't exist. And for me the sets all tend to flow together. As soon as have I handed in one assignment, the next rolls in and the two assignments can be sets—or literally be worlds—apart. As a result I can sometimes have a difficulty remembering which card is from what set, and this difficulty is exacerbated by the addition of code names, temp card names, and finally the real names of both the sets and the cards upon release. It's a lot to keep straight.

Anyway, immediately after coming off of the Greater Sandwurm assignment I was again asked to revisit the subject of the Amonkhet sandwurms, but this time in a very different context. For this new piece I was asked to show a wind-blown, black sand desert with bones strewn about, the centerpiece of which would be the skeleton of the sandwurm in question.

While the wurm itself was depicted in the styleguide Wizards provided, the wurm's gross anatomy was not. So, figuring out exactly how to design a sandwurm's skeleton was the difficult part. While a "worm" is an invertebrate, and thus has no backbone, a "wurm" is a different thing altogether. Classically, the creature called a "wurm" is a just a dragon, but Magic typically has pushed its "wurms" in much more of a "worm" direction. So, I split the difference and started by looking at snake skeletons.

While a snake skeletons were a good place to start, they don't quite fit the design of the Amonkhet wurm, which is far flatter and has the vague appearance of being segmented. What to do, then? Make stuff up. Sure, I looked at a lot of different creatures in an attempt at making informed decisions, but truthfully the solution was largely just playing around with shapes until I found something that was satisfying and felt like it might actually fit inside the wurms as they were depicted in the styleguide.


Were I to design the thing all over again, I think I'd go a different route and maybe rely more on snake anatomy and find away to flatten it out believably. Instead, I got hung up on the idea of them being segmented and tried to find a way to sell that. As it was, the fine folks at Wizards approved the piece and I was off to the races.


The finished painting is oil on hardboard and measures eighteen inches wide by fourteen inches tall. It was art directed by Cynthia Sheppard.

In terms of painting the piece, it was among the easier pieces I've ever had to paint. There was very limited color, so it felt more like a value study than a full-fledged painting. The work went smoothly and I'm pretty happy with the results. Sure, I'd make some different choices were I to do it again, and sure there's some stuff that I had to fudge to make it work, but I think I managed to get what I wanted out of the piece in terms of mood and atmosphere. Most importantly, this was a fun piece to work on. Seriously. This one was a win. 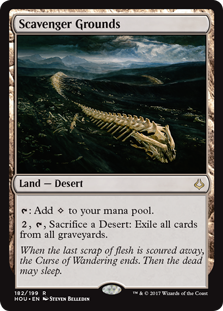