From the Flat Files 2 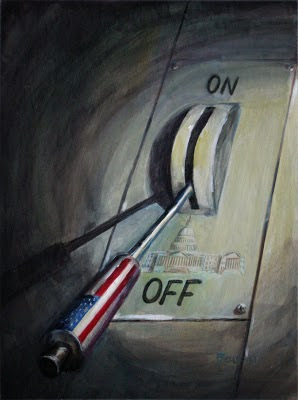 So, another piece from the flat files.  This one was done during my sophomore year at Pratt which spanned 1995-'96.  One of the big stories of the time was the government shutdown.  I won't bore you with the details, but suffice it to say that I did this piece for class with that story in mind.  It's 12"x16" and is mixed media (mostly acrylic and colored pencil).  I'm not saying it's brilliant, but I was pretty happy with it at the time.

After my sophomore year, this piece found itself in my parents' basement (along with all my other work), where it suffered from the damp air.  Consequently, it stuck to the back of another piece and was damaged beyond repair.  Physical repair, anyway.  Photoshop to the rescue!

While I'm at it, here's another one I did that's completely unlike what I do today: 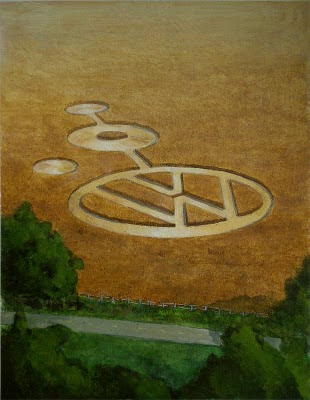 The assignment was to do an advertising piece.  I chose Volkswagen.  This decision was made because I had the idea of incorporating a logo into a crop circle before I had decided on a product.  I needed a product with a graphic, circular logo, and Volkswagen came to mind.  This is obviously putting the cart before the horse and is not actually solving the problem.  In fact, it's kind of cheating.  But, I got away with it and decided to share the piece, anyway.  This one is also mixed media (mostly acrylic, ink and colored pencil) on illustration board, and is 14"x16".

The piece was painted during my junior year which spanned from 1996-'97 and was done for Dave Passalacqua, a legend at Pratt.  He and I didn't always get along very well, and he actually gave me a lot of antiquated advice that wasn't relevant to today's market, but I still have to say he taught me quite a bit and inspired many stories that my friends and I still tell to this day.  Sadly, he passed away in '04, but he's one of those guys that I'll never forget.  His voice, which I can still hear in my head, won't let me.
Email ThisBlogThis!Share to TwitterShare to FacebookShare to Pinterest
Labels: Acrylic, College Work, Illustration, Mixed Media