From the Flat Files 3 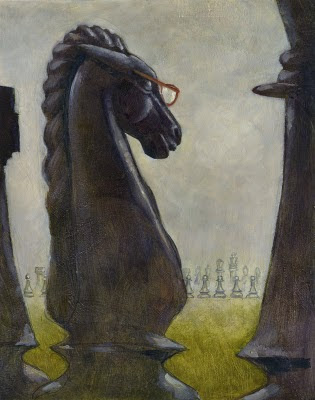 Day three in my attempts to embarrass myself.  How am I doing so far?

For the life of me I cannot think of the assignment.  It's a weird little piece, to be sure.  It was done either at the end of my junior year or the beginning of my senior year at Pratt, which would be 1997.  It measures 11"x14" and is on illustration board.

This piece was the at the beginning of the wave of work that I did when I finally had decided on oil paint as my chosen medium.  I'd done a bunch of work in high school in oils and enjoyed the medium quite a bit.  Then, I went off to college and during my freshman year continued to paint in oils.  However, in my sophomore year, I had a class called "Methods and Media," and my professors for the course were Rebecca Guay and George Pratt (in consecutive semesters).  In this class I was exposed to different techniques using various media.  We worked in acrylics, oils, collage, watercolor, and then mixed many of these media in various techniques.  For some reason, I latched onto the mixed media technique that I used to do the pieces in previous days' entries, and it's the technique I used on the vast majority of projects I did until a point in the second semester of my junior year.

As I recall it, I was assigned a self-portrait by Dave Passalacqua and as a change of pace I chose to do it in oil.  When it was finished, my friend, Jeremy, took a look at the piece and asked, "why don't you do all you're work in oil?  I mean...your work in oil always looks...well it's better."  (Jeremy has always had a way of getting to the point).  I took a long look at the body of work I'd done in mixed media, then looked at the few oil painted projects I'd done, as well as the oil figure paintings I'd done in my painting classes and realized that he was right.

So, I switched to oils.  Permanently.  The really strange thing, though, is that my oil illustrations were really thinly painted to begin with.  A lot of the drawing still showed through.  This is something I had not done before.  I mean, look at it — this one is really unpolished, and this piece and other work I produced like it constantly garnered comments like, "this is a cool piece, it's just a shame you don't know how to paint."

If I could have, I would have argued with them.  But they were right.  Still, I never gave up.  I'm still illustrating and I'm still using oils, and I think my work is better for it.
Email ThisBlogThis!Share to TwitterShare to FacebookShare to Pinterest
Labels: College Work, Illustration, Influences, Oils