From the Flat Files 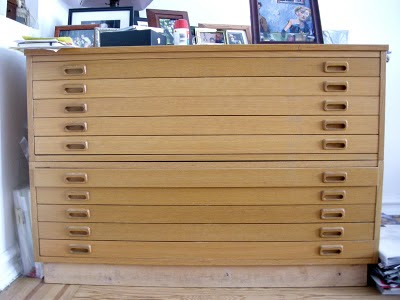 These are my flat files.  Flat files are excellent at crushing fingers.  In fact, I think that they excel at doing that that anything else.  A distant second to crushing fingers, flat files are also good at storing art.  While unpacking, I came across a bunch of stuff and decided I'd go ahead and share some of it each day until the end of the year.  So, here goes... 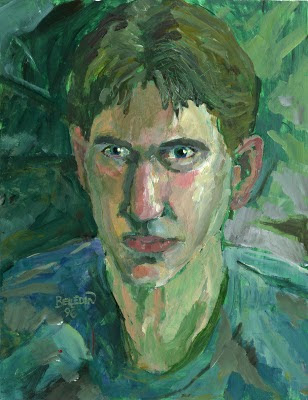 This first piece is a self-portrait I did in August of 1996.  It is mixed media on illustration board and measures 9.25" x 12".  It was done in about two hours (which I think is pretty obvious).  It also comes with a story and a very important lesson.

I was 19, and was just about to begin my junior year at Pratt Institute and had a few spare hours to do something amid my various responsibilities as a new Resident Adviser in Leo J. Pantas Hall.  The dorm's freshman occupants had not yet moved in, so it was serene.  The halls were empty and the only sounds were the birds singing on the branches of the tree just outside my fourth floor window.  I felt inspired, so I grabbed a spare piece of board and painted this.

As I said, it was a pretty quick piece.  At the time, I worked in a sort of mixed media technique that relied heavily on acrylic paint and this piece is no different.  It's done in a far less methodical way than I usually worked, but contained many of the same ingredients: a pen and ink drawing with water soluble dye washes followed by some acrylic paint.  It was quick and dirty, and there was liberal use of a hair dryer.  I finished it, signed it, and set it aside.

Once classes had started, I took it to a professor of mine, George Pratt.  I was pretty happy with how it had turned out and was pretty hopeful that he would be, too.  I arrived at George's class early to find him playing chess with Richard Clark, a friend of his.  George took a look at the painting and immediately critiqued it.  Though I don't recall all he had to say about the piece, I think I can now guess at a lot of the things he pointed out.  He was his usual, constructive but brutally honest self and was nothing, if not thorough.  I took his criticisms in, thought about them, and thanked him for taking the time to look at my "piece of crap" painting.

George immediately jumped on me.  Why, he asked, was I being so hard on my work?  Why would I refer to this painting as a "piece of crap?"

Because it is, I replied.

While I don't remember his words exactly before this point, I remember his next ones verbatim.  "Man," he said, "don't ever refer to your work like that.  Ever.  If you keep calling your work crap, then eventually you'll believe it's crap.  And once that happens then crap is all it'll ever be."

There are a variety of reasons why I have kept certain pieces over the years, while allowing others to be lost, destroyed, given away, or thrown out.  This piece I keep because of George's words.  Words that have gotten me through some tough times.  This piece is a constant reminder to never give up on myself, and to believe in what I do — two things without which I would be nowhere.
Email ThisBlogThis!Share to TwitterShare to FacebookShare to Pinterest
Labels: College Work, Illustration, Influences, Mixed Media