Back in 2008, I received a mysterious package in the mail.  It was one of those bubble envelopes containing what I thought at the time was product from Magic.  I was living in our place in Jackson Heights and the package took up the majority of our tiny mailbox. As I often did, I took the mail and laid it on the kitchen table to be picked through later.

At lunchtime, I went ahead and started perusing the mail.  After looking the bills over, I finally got to the package and quickly realized that my assumption that it was from Wizards of the Coast was wrong.  There was no Magic product contained therein.  In fact, I didn't recognize the address at all, nor the name of the sender.  I shrugged, tore open the package and pondered its contents.  This is what was inside: 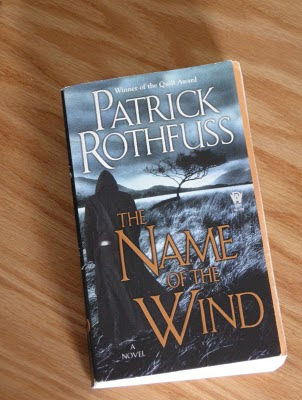 Then I wondered, why had Patrick sent this book to me?  There was nothing in the package that I could find aside from the book.  So, no apparent explanation.  I flipped through the book's pages to find that it was signed by the author.  Curious.  Then, I flipped through the pages again, only this time a business card fell out.  It was Patrick's business card.  I turned the card over, and found the beginning of the answer I'd been looking for: 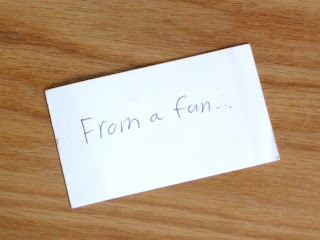 I had to know.  So I emailed him.  He gave me his business card, after all.  After a few emails back and forth it became clear to me that we'd talked for a while at Gen Con.  I had no idea who he was, and I'm not sure whether he knew who I was before then, either.  But we'd talked.  After finally seeing a picture of him, I was able to conjure the memory of having the conversation, though I cannot even begin to tell you what we spoke about.  I like to think that it was a lofty conversation about artistic ideals and the danger of cliche, but since I was involved in said conversation it likely centered around something far more crude and bass.  Either way, I somehow made an impression on him.  Or at least my work did.

I realize, in retrospect, that this was among the cooler things that have happened to me over the years.  At the time, however, I was too dumbfounded to understand how cool it actually all was.  No one had ever gifted me with something like this before, and it's only happened once since (on a book I'd worked on).  And as the confusion started to ease over the day, I actually did become pretty elated.  There was just one hitch: I never learned to read.

Okay, so I can read.

There really was an issue, though.  I don't generally read fantasy books.  This might be a weird statement considering the genre I work in, but it's completely true.  I avoid immersing myself in the genre on all fronts.  I already work primarily in fantasy, a lot of the games I play are science fiction or fantasy games.  I tend to watch a lot of movies in the genre, as well.  Books, on the other hand, are something else entirely.  The time investment means that I choose my books carefully, and most of my selections are a vacation from what I do day in and day out.

And so I did.  And I liked it.  I liked it a lot.  It is one of the few books in the genre that I have recommended to anyone who will listen to me.  I have shouted its merits at conventions, at bars with friends, and on planes with strangers.  I liked it enough to run out and try and procure a 1st edition, 1st printing of the hardback edition, but have found much to my horror and disappointment that it's more than I can afford.  So, I settled instead for a 5th printing, which sits proudly on my bookshelf among the various other tomes that I have collected over the years.  It stands as one of the few books that I have reread multiple times, and something from which I have drawn inspiration.  It's also the only book I have even threatened to do any kind of fan art for and still may.

So why do I bring this up?  What gives?  I'll tell you.  This has all been a shameless plug for something that I had nothing to do with.  You see, yesterday the book's sequel came out.  The Wise Man's Fear.  I have not gotten my copy yet, but I wait with much anticipation.  In just a few days, I will have it and will tear through it just as I did The Name of the Wind.  Judging from it's Amazon sales ranking (I think it at least go up to number 8), it would appear that many people will be doing the same.  Given that many reading this are likely to be reading that, the shameless plug may be unnecessary.  But if I bring one new reader to the series (there are a planned 3 total), then I think it's been worthwhile.
Email ThisBlogThis!Share to TwitterShare to FacebookShare to Pinterest
Labels: Books, Fans, Gen Con