I teased this about a year ago but then, as projects sometimes do, it was postponed.  Then, after clearing my schedule in preparation for the move, it reared its head again.  And now, I bring it to you.  The project in question is a cover painting for the print version of volume 1 of an online comic called Valentine, which was written by Alex de Campi and drawn by Christine Larsen.  You can read the comic here and check out the official website here.

Over the coming days, I'm going to post progress pictures right here on the blog and talk a bit about the process as I work on the painting.  I can't promise quality images, or even quality painting, but you should get some idea of how a piece — well, this piece — comes together.  But today, I'm going to go over a bit of the story behind the job and show you all some sketches.

This job came out of the blue for me, not unlike the Badass books.  Unlike the Badass books, the job happened because another artist was kind enough to give the writer, Alex de Campi, my name.  Now, it's been my personal experience that artists recommending other artists for jobs is a bit rare.  And while I've experienced it only once or twice, I know from the illustration grapevine that it does happen a fair bit.  Such a thing can be a risky proposition, to be sure. Should the artist being recommended drop the ball, both the recommended artist and the recommending artist look like jerks.  So, it usually happens between folks who can trust one another.  That is certainly the case on the occasions I've passed along names of other artists to art directors, and I think was the case here.

Anyway, I got the initial email from Alex, and I agreed to do the job.  After we batted around ideas, we settled on the primary elements that needed to be in the image: our hero, Valentine, snow, and a giant worm comprised of the corpses of fallen soldiers.  Valentine needed to be wielding a sword and his uniform needed to be accurate.  Now, given that the comic is set during the Napoleonic War, and given that Valentine is a member of the 7th Hussars, there was some pretty specific reference involved, much of which Alex was nice enough to provide.  I supplemented this reference via a couple books I have (I'm a bit of a war book junkie), and Google Images.  As I don't own the copyright to any of these images, and as I don't have the time to ask permission to use them, I'm not going to post this reference (I play by the rules, sue me).  What I will do is give you this link so you can check out the kind of thing I'm talking about if you're interested.  Finally, specific to the character was a period hairstyle which involved braids on either side of the head.  This is clear in a lot of the reference, and I'm almost positive is present on Keith Carradine in the underrated and under-watched Ridley Scott film, The Duelists.

So, I took all the comprised reference, ran with it, mixed in some ravens which appear repeatedly throughout the story and produced a couple of sketches for Alex's consideration: 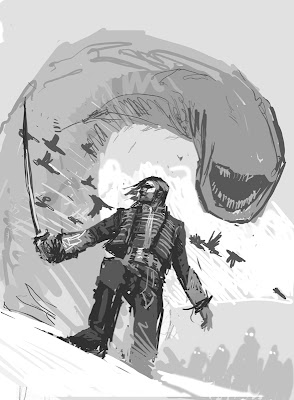 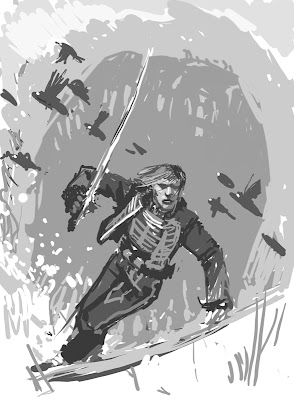 In the top sketch, I wanted to have something that was more design and montage oriented (note the zombies in the lower right).  I wanted to give her something that was less a straightforward image.  I don't think I was entirely successful, but I do feel like there's something promising in the overall design, and I think with some tweaks, some back and forth with Alex, and a little more effort, I could have hammered out a sketch that worked.  But it turns out I didn't need to, because sketch number two existed.

The second sketch is a far more direct, straight to the jugular image.  It's Valentine, man of action, struggling against the elements as the worm bears down on him from behind, obscured by the snow.  The sword is obscenely long, but aside from that I think works pretty well and hits all the notes.  Alex seemed to agree and I was given the green light.

But that was a year ago.  And like I said, things happened.  Still, it all worked out, because here we are again.  The piece now sits on my easel, ready for paint.  Hopefully it'll come together nicely.

So, like I said, I'll be posting progress shots as I go.  I don't know that there will always be amazing amounts of work done on the job each day, as I'm currently working on two other projects, but there will certainly be a lot of ground covered at times, so be sure.  After all, this thing is due soon, so I guess I better get to it!
Email ThisBlogThis!Share to TwitterShare to FacebookShare to Pinterest
Labels: Digital, Illustration, Sketches, Valentine