As I've done in the past, I turned the sketch into a monochrome image (this one was blue), then printed it onto 90 lb. Arches watercolor paper using my trusty Epson Stylus Photo R1900.  I then paste this down onto a piece of Ampersand hardboard, which is a pretty hardy material that doesn't bow too much, if at all... unless you put your painting in the oven.  Then you find yourself in your father-in-law's basement gluing one by twos onto the back of the board to cradle the piece after the fact.  But I digress.

The board I chose is 16 x 20, which presents a slight problem given that the printer's capacity is only 13 inches wide.  How did I get around this?  Simple: I folded the paper back an inch and half on either side of the sheet to get it down to the correct width.  Believe it or not, the printer has no issues with this, and I've yet to have a paper jam.

Now, there are two drawbacks to folding the paper.  First, you don't get the entire sketch printed out, just the center 13 inches (or 12 and three quarters to be more precise).  This wasn't a problem for me as the meat of the sketch is straight down the center.  But, if that weren't the case, I could just fold the paper differently to print a different section of the sketch instead.  Additionally, if you've got a sketch that involves tonal regions, there will obviously be a pretty hard line where the tone cuts out.  I get around this by putting an acrylic wash down that matches the color as close as possible.  I'll do several layers if necessary, but there's usually no need to go too nuts as I paint pretty opaquely to begin with.

The second drawback is that the creases can become raised when the piece is pasted down.  How I deal with this is pretty straightforward.  After printing the sketch, I immediately unfold the sides.  I then take the sketch to a clean, flat surface and using a bone paper folder (or like substance), I try and force out as much of each crease as possible.  While it doesn't flatten the paper out perfectly, it does mitigate some of the issue.  After pasting the image down, the vertical lines will sometimes still be noticeable and the surface will be raised above the folds.  Given that I already coat the surface liberally with acrylic matte medium to begin with, I just do a couple more coats.  Then, after it's dry, I sand the surface down using increasingly fine grades of sandpaper, and ending with a Scotch-Brite pad to buff it out.  While sanding, I pay special attention to where the creases are, and have gotten to the point where I can usually make them relatively invisible.  Unfortunately, I'm never entirely sure just how visible they'll end up being until the final varnish is put on the painting.  All that shine brings serious attention to surface flaws.

Granted, what is listed above is not always how things go down.  Sometimes I go out and get my stuff printed large format without any creases.  It's just that this time I've got a lot going on, and because I've only lived here a month or so, I'm not quite sure yet where I'd go for that kind of thing.

Anyway, after I'm happy with the surface, I give it a final wipe with water and let it dry.  I don't touch the piece again until there isn't even so much as a hint of dampness.  Then I start painting. 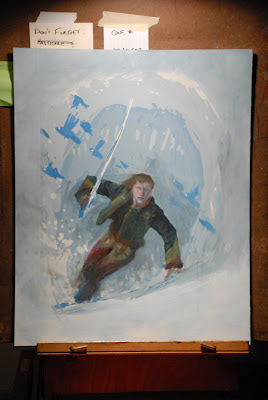 I know what you're thinking: I hardly got anything done.  I blocked the figure in and that's it.  You're kind of right if that's what you're thinking — like I said before, I've got two other projects going on — but there actually is a fair bit of work done here.  The fact that the paint has dulled hides a lot of what I've been up to, but I assure you that the value structure has been hammered out.  Next time, I'll oil the piece up before shooting it.

Here's a larger shot of the figure: 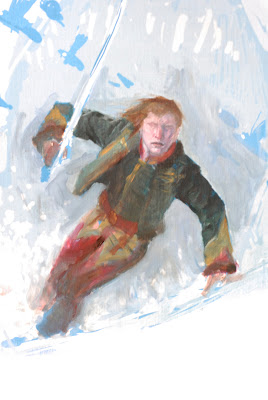 So, why jump into the figure?  Do I always start that way?  No.  It's a weird answer, but I start on whatever interests me at the time.  Getting started on a piece is always the most difficult part for me, so I kind of need something fun to initiate things.  In this case, the figure is the most important element and I needed to make sure that I had his palette correct.  I also needed to start pushing him toward the photo reference, which I'll show tomorrow, as I'll have far less to talk about.

Anyway, that's where it stands.  Today I plan to focus primarily on the face and then work out from there.  So, I guess I should get to it...
Email ThisBlogThis!Share to TwitterShare to FacebookShare to Pinterest
Labels: Acrylic, Oils, Process, Sketches, Valentine