Chiseling away at the uniform has been pretty interesting and a bit time consuming, but it's finally coming to a close.  Since I started working in the fantasy genre, I've seen all manor of uniforms and outfits represented in the various worlds I've gotten to play in, and it's pretty rare that they are more outlandish than some of those actually worn by real people throughout history.  Truth be told, this particular uniform is pretty tame.  While there's a lot going on in it, there's still some that I've not included.  Take the hat for example, which is tall, resembles a bucket with a brim, and features a fair bit of ornamentation, a puffball, and a very tall plume.  The uniform feels on some level like it would be quite at home in many fantasy worlds out there.  It's familiar, yet somehow alien.  At the very least, it's a far cry from anything we see today... Well, anything we see today outside of Fashion Week.

I can't say that I'm too upset that the hat's inclusion wasn't requested, as the challenge of pulling it off might be beyond my skills.  But hats are hard in general.  Unless it's a fedora.  Everyone looks cool in a fedora.  Someone really ought to bring those back...

Okay, back to the painting. 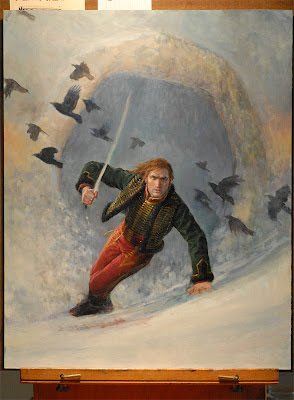 I've made some clear progress on the uniform, done some tweaks on the face and head as per the author's notes, blocked in the hands, and started figuring out the sword.  Also new to the scene are the ravens, and believe it or not I've done another quick pass on the background.

The color in the far background is something I added for the heck of it.  I wanted to see if it would work, and if it added anything to the piece.  It was inspired by the sky I saw one morning last week as I drove my wife to the train station.  There was a shocking slash of pink that was extremely finite and graphic due to a storm front passing over.  I'm still not completely sold on it in the painting, but I don't think it's a bad way to go.  I like the color it adds to the piece, but I'm a little afraid that it kills the mood.  I'll toy with it a bit more, but will likely not make up my mind until the worm is closer to completion.

Adding things to a piece or subtracting them is something I'll often do.  I like experimenting a bit as i go.  The key to doing this successfully is to make sure that the elements being toyed with serve the piece as a whole and do not cause the piece to veer too far from the sketch approved by the client.  It's also extremely important to not be too married to the experimentation.  While these whims may pay off big, they can just as easily blow up in my face, and I have to be honest with myself about that.  For, just as a surgeon may have to amputate a leg to save a person, I might be forced to paint over or wipe away those elements I've been fiddling with.

In the case of this painting, I am tossing color around primarily to keep the piece from feeling to bland.  Despite all the color in the snow, the uniform, and what will eventually be the worm, there's a part of my brain that worries that the piece as a whole is getting too dull.  Personally, I like extremely limited color palettes, and were there no commercial aspect to this piece my instincts would drive it to a point that would make Saving Private Ryan's palette look like that of the Wizard of Oz.  While there are times I get to let those instincts run wild, a book cover is not really the appropriate place for that.  A series of gray and brown smears doesn't exactly jump off the shelf, and is hardly appropriate for Valentine.  And so, I'll be experimenting with the piece on some level until the very end.  All the while, I'll be striving to achieve a point where the color and tonal aspects of the piece are in balance with the overall intended mood, and are in keeping with the book itself and the client's wishes. 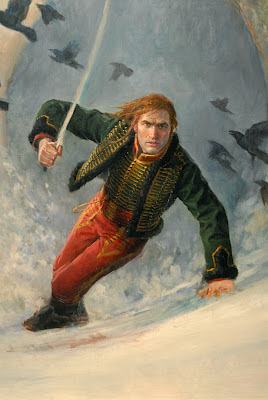 Yesterday, Daarken was nice enough to give me a quick crit on the image.  He pointed something out that I happened to be working on at the time, which is that the upper part of the sword arm feels a bit long.  What you should see is how I've changed things.  But, you won't until tomorrow.  As I write this, I'm a day ahead of what I'm posting.  Due to the likelihood that I will get nothing accomplished tomorrow, I figured I'd pad the posts by a day so as to maintain a regular schedule of things.  Come Friday, I will be in sync with my actual progress.

Tomorrow, I'll be giving another update on the piece and will be adding my thoughts and any other bits of cheese as necessary.  Friday, I'll chat a bit about maquettes and show you the one I did for this piece.  It's really not special, I assure you, but it's part of the process so I guess it's worth mentioning.  Hopefully you will see the payoff for making the maquette, and with a little luck, the piece will quickly come to a close over the weekend (though it's likely I'll skip the weekend posts so as to give myself some extra time to do things like my taxes and such).

For now, I'm off to paint.
Email ThisBlogThis!Share to TwitterShare to FacebookShare to Pinterest
Labels: Illustration, Oils, Process, Valentine