So really quickly, I'm going to show you what some of the home brew reference looks like.  These shots were taken by my wife on our porch.  I went with this location for a couple of reasons.  First, it's open and we have a lot of room to move around.  Second, the light was from the right direction and was diffused to about the degree I was going for.  It was overcast outside and given that I'm doing a snow scene, I thought that to be appropriate.  I suspect that in the future, I'll be shooting quite a bit of reference in this space.  It seemed to work out rather nicely.

These are just a couple of several dozen shots taken (thank goodness for digital photography as doing this with film would be cost prohibitive).  The number of photos taken can vary greatly from piece to piece and is usually related to how many figures are involved or how difficult it is to hold a given pose.  This one turned out to be pretty difficult, and so no single image represents the pose in its entirety.  To deal with situations where this is the case, some illustrators will use Photoshop to create a Frankensteined master image comprised of all the various parts that make up the finished pose.  The left arm from this picture, the torso and right arm from that one, the head from a third, and so on.  This technique is especially helpful when dealing with poses that are physically impossible, but look cool.  While I completely see this technique as valuable, I don't actually use it myself.  Instead, I rename the various photographs with appropriate titles indicating their respective value and switch between them as necessary.  Admittedly, this technique is a little less efficient, but I enjoy the mental math of it all and I find that it helps keep the process interesting.

So, as far as the props and costume go, I am wearing a replica of a Union Army private's uniform from the American Civil War.  While this is not authentic to the Napoleonic era, it is a lot closer than jeans and a t-shirt.  At the very least, the uniform is made of wool, and thus will drape similarly to the Hussar uniform.  Additionally, in order to replicate the various elements on the Hussar uniform, I used copious amounts of masking tape.  Absolutely not authentic at all, but it does provide me good reference points to keep things feeling natural.  For a sash, I used a winter scarf and am ignoring the excess which hangs down in the back.  As you can see, I'm leaning on a stool, and holding a dowel.  Originally I was weilding a sword, but being as athletically disinclined as I am, it proved too awkward and heavy for holding the pose for any prolonged period of time.  Valentine, I am clearly not.  If I had an assistant, or a powerful fan, the jacket would be blowing about appropriately.  As I have neither, I will just be forced to once again do some mental math.

Alright.  On to the painting. 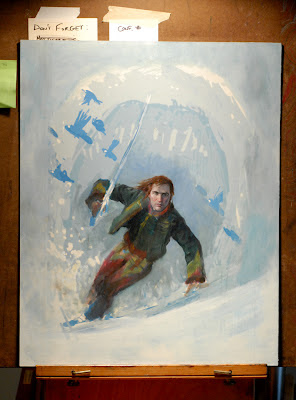 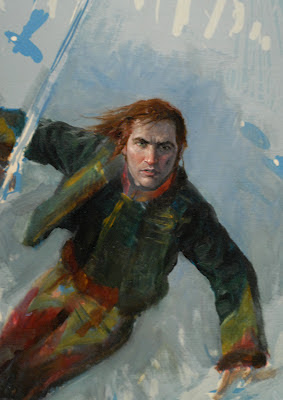 Again, not tons of progress, but true to my word, I concentrated on the face.  I'm not sure I'm completely sold on it quite yet, but I think the majority of the ground work has been done.  The difficulty with this particular face has to do with the fact that I am trying to interpret comic line drawings and translate them with my own sensibilities.  In case no one has taken a look at the character, here's an example of what our hero looks like: 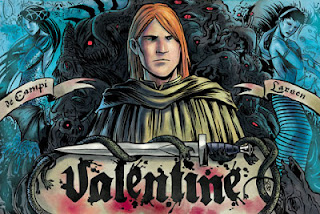 There's a decent amount of information to go with there.  I know he's got a strong chin, I know his general coloration and I can glean the overall shape of his face, cheek bone structure, etc.  So, it's my job to reinterpret that and bring it into my own visual language.  This is a challenge to say the least.

Were this a novel, and I was being asked to depict the main character for the cover, there'd be a little less legwork.  I mean, there isn't any art, just words.  I'd absorb the description as best I can, then try and depict it as accurately as possible.  If someone subsequently read the book and felt that I'd missed the mark, they could just brush it off as "that's not how I imagined them."  Here, I have something to live up to.  If I've missed the mark, someone can point to a given page or panel and say, "look, idiot!  Here is proof that you suck at this!" ...or something to that effect.

Adding to the challenge is that I've been asked to make him a bit more historically accurate for the cover (which requires changes in the hair, changes in the uniform, etc.), thus taking him further away from the pages of the book.  What I'm left with is an attempt to strike a balance between two Valentines.  I must figure out a way to reference what is in the book, but still adhere to the demands of the art order.

To get a visage that accomplishes this, I started by ignoring my own face in the reference as much as possible.  I kept the lighting in mind and some of the coloration, but the structure needed to be thrown out.  I then started digging up additional reference of models and photos of my friends that were a lot closer to looking like Valentine.  I looked for people with strong chins and similar facial structures to the comic.  I took these various images, put all of them into my mental blender, start painting, and hoped for the best.  Admittedly, there are still elements in the face that feel a bit too similar to my own, but I've used the faces of a couple models and few friends pretty liberally (I'd prove this with photos, but none of them are mine to show).  I've had to do a bit of age regression, but I feel like it's pretty close to what I wanted it to be.  I think.

Anyway, up next for me is starting to work out the pose, the uniform, etc.  Then, I'll likely go on a background bender.  I'll be sweet.  You'll see.
Email ThisBlogThis!Share to TwitterShare to FacebookShare to Pinterest
Labels: Oils, Process, Reference, Valentine