The progress between days three and four once again seems pretty minor.  I've done a bit more work on the face, though it's admittedly very subtle, and I've begun work on the uniform.  Overall, I'm trying to keep the uniform's hues intact, but skew them a bit cooler to keep with my overall planned palette.

The jacket's color presents an interesting challenge.  Wool fabric of the type such uniforms were made absorbs a great deal of light, so even the lightest highlights tend to look rather dark.  Keeping the jacket reading as green and keeping the darks from going to black too quickly is proving to be an interesting challenge.  One final pass should get me there, but we'll see.

The jacket will be lined with fur and there's a bit of a debate going on in my mind as to what color to make that fur.  Depending on the reference, it is depicted as either black or a medium brown.  I've looked up lieutenant uniforms for other Hussar units to see if I could find something more definitive, and it looks like more information points towards black than anything else.  I'll deal with that tomorrow and will for now leave the lined cuffs, collar, etc. unfinished.

The red pants are a also proving to be a bit of a challenge.  In fact, the color red in general has always been something that I've struggled with.  My issues primarily revolve around the colors of highlights and shadows.  I always find cool highlights on red objects to ring oddly false, even when they're accurate, and this case is no different.  I'm also struggling with how intense I want the pants to be.  In real life, they'd be very brilliant.  That is, of course, if they were new.  With this piece, we're dealing with a soldier who is struggling through a Russian winter.  I'm guessing they're not quite pristine.  But that's beside the point.  More important than all of that is what best serves the piece.  I'm going to have to keep aware of whether or not the red becomes distracting.  It think I could push it a bit brighter, as it's easier to kill it later on than bring the purer red back. 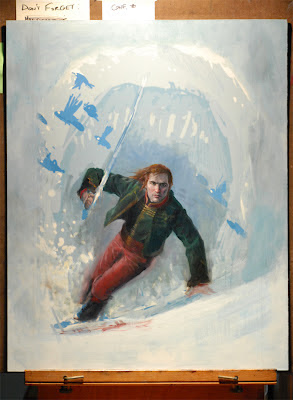 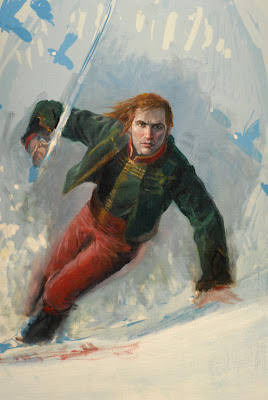 It's at this point that I start becoming a bit concerned with anatomical issues like the fact that the head feels a little big for the body and that the hip area feels a little wonky somehow.  Neither of these issues are too difficult to fix, but it wasn't until I started to solidify the figure in any real way that they became noticeable.  I've never been entirely sure why this has always been the case for me, but my brain tends to overlook some issues when it comes to sketches.  Issues that turn around and become problems once the finish is underway.  I'm thinking some additional drawing and perhaps another reference shot or two will help me remedy some of the issues.  This time, perhaps, the reference will be done without a jacket so as to allow the hip area to be more visible.

It's also at this point that I begin to come to the realization that I'm not entirely comfortable with how much Valentine is just floating in the ether.  He's not relating to a whole lot right now, because he's the only thing present.  I'm going to have to start dropping real tones into the piece soon, and start addressing the background in some meaningful way.

Today I will do another pass on the face, and begin to bring the uniform home, then I'll begin blocking in some background tones...or something.

As an aside, I've been on a podcast kick of late.  Thus far, this piece has been painted while listening to the Smartest Man in the World with Greg Proops, the Nerdist Podcast with Chris Hardwick, and the WTF Podcast with Marc Maron.  Curiously, I've found a lot of issues and stories that have been shared by the comedians on these shows to be similar to ones I've heard from illustrators.  It's kind of weird actually.  The really nice thing is that while I am, in fact, alone in my studio, in another sense I'm really not.

Until next time...
Email ThisBlogThis!Share to TwitterShare to FacebookShare to Pinterest
Labels: Illustration, Oils, Process, Valentine