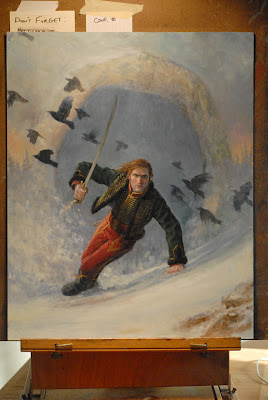 The change to the sword arm was a bit tricky.  As soon as I added a more solidified blade, and that line cut across the arm so sharply, the problem called attention to itself immediately.  I pushed the forearm this way and that in order to keep the upper arm from feeling too long.  I'd get it to the point where it felt about right, only to realize that I'd made the upper arm too short, then I'd revisit it only to over correct and make it feel too long again.  Eventually, I think I managed it (though I'm sure Daarken will speak up if he disagrees).

For some reason, I decided on pine tree silhouettes in the background.  I have since rejected this idea as I think leafless deciduous trees are clearly the way to go as they are far more stark and moody.  It doesn't hurt that it's also in keeping with what is depicted within the story itself.  So, those will need to change. 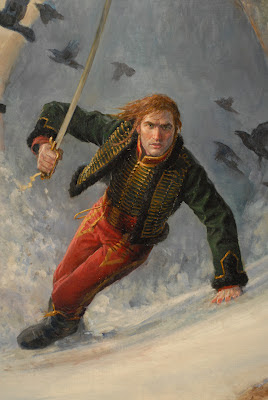 Still present is the color in the sky.  In fact, I've added to it and I think I'm warming to its presence, but I still feel that the worm may impact the final decision.  Speaking of the worm, the mushy, complete lack of definition has now reached critical mass.  The maquette needs to be completed (for the second time — the first one having been crushed by the weight of the board it was stuck to after falling off the table), and photographed.

Leaving such a large element of the composition so undefined for so long is something I don't recommend and is probably a mistake on my part.  Waiting to paint until I'd gathered ALL of my necessary reference would definitely have cut down on the painting time and would have been far more efficient.  Typically, I would have done a lot more preparation on the front end, and I really have no excuse or explanation as to why I've dealt with this painting in such a piecemeal way.  The only upside seems to be that I have more steps and thus more blog posts to show for it.  To be sure, with 11 paintings due over the next five weeks, my efficiency is about to skyrocket. 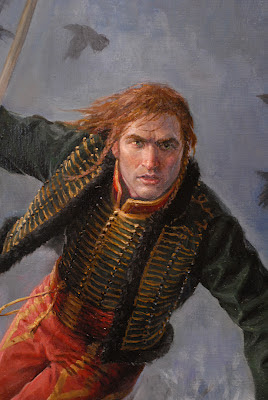 Despite being really close to completion, I've noticed a detail on the figure that I will need to correct: the bands on the portion of the fur-lined jacket to our right should not be stretched taught, but rather be flapping freely as they are what is secured around the buttons in order to close the jacket.  A very minor thing — especially given the bigger problems I'm facing with the structureless background worm — but something I can easily correct and will do so.

To be sure, the worm is the key to moving forward, and that is what I will concentrate on.  The sword and the ravens need another pass, which likely won't happen until the worm is done.  The more distant background elements need another pass as well, but again — worm first!  Outside of that, a few foreground elements remain to be added, the snow being plowed needs some additional definition, and then I get to do one of my favorite parts of any painting: push and pull.  Push elements back as necessary with a glaze or two; pull elements forward by increasing contrast, popping highlights, etc.  These are the finishing touches, and they'll be here before I know it.

But I'm getting ahead of myself.  First: the worm.
Email ThisBlogThis!Share to TwitterShare to FacebookShare to Pinterest
Labels: Illustration, Oils, Process, Valentine