The second maquette I built for the worm was less elaborate.  The first one was a thing of beauty.  Oh, you should have seen it.  Articulated teeth, nice texture.  It was almost perfect.  But then it got crushed before I could photograph it.  Brings a tear to my eye.  The second?  Well, it's nothing special.  It was quicker and dirtier, and done in frustration.  Nevertheless, it had all the things necessary for me to move forward on the worm with more confidence.  Let's take a look, shall we? 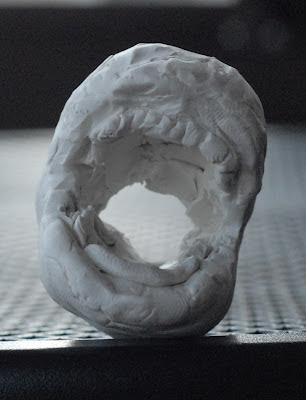 The worm's design is based on the drawings inside the comic.  If you want to take a look at those, I highly recommend you flip through the comic (the worm is probably best seen in #5).  There are a couple really nice drawings from several different angles and I did my best to be in keeping with that design.  I then placed it in the same location around the same time of day as the reference of me in costume, and got about the same light as a result.

Now, maquettes are something I spoke briefly about in a series of posts I wrote a while back about reference.  I even included a picture of a few others I've sculpted.  They're not always brilliant, they're not always beautiful, and they're almost always supplemented with photo reference.  While this seems like a lot to wrap your head around, to me it's always better to have too much information than not enough.  You can always ignore what you don't need.

For the most part, my maquettes are usually constructed using Sculpy, paper, cardboard, and tape.  Sometimes a little hot glue if I'm feeling saucy.  Rare is it that I end up baking the maquettes to harden them, as I prefer to be able to scrap them and build new ones as necessary.  Some I've kept over the years.  Others I immediately flattened upon the jobs completion.  But whatever their lifespan, I've found them to be really useful for certain things.  Sometimes they're good for architecture, sometimes for bizarre creatures, and sometimes they're good for really nailing a character's likeness (something that is particularly useful if you have to depict said character more than once).  The point is, even a weak sculpture like this worm, lit properly, provides more information than nothing, and it can really help the believability of a piece, as well as the illusion of three-dimensionality. 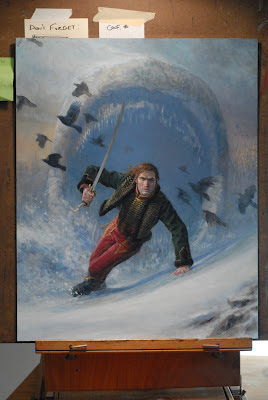 So, worm maquette built, lit and photographed, I proceeded to take on the biggest blank space in the piece.  Finally, structure and form were added to the worm.  It's only a first pass, but it's finally taking shape.  There are certainly concerns.  I don't buy the blue of the worm's shadows, for example.  I don't buy its value structure.  I'm also thinking I need to skew the worm's angle more than I have.  It feels like it's gotten more upright.  Still, the addition of real structure to the piece is beginning to give it a more finished feel. 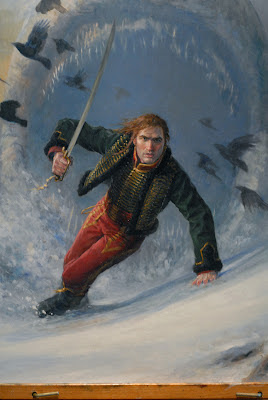 Anyway, it's about time for me to climb back into the old painting chair and commence the day's work.  With a little luck, the worm will progress nicely, and I'll be able to push a few other things further along.  Perhaps I'll begin throwing in the weeds sticking out of the snow in the foreground or some such.  We shall see.
Email ThisBlogThis!Share to TwitterShare to FacebookShare to Pinterest
Labels: Illustration, Oils, Process, Reference, Valentine