Three days of silence.  Days, believe it or not, that were pretty full of work.  Hence the silence.  One can always tell how under the gun I am by how communicative I happen to be, and how unshaven I've become.  The closer to the end of a job, the more slovenly my appearance becomes.  An obsession with completing the job begins to well up within me, and a chant begins inside my head that has been known to escape my lips: I can't wait until this job is done.

Mind you, it's not the kind of obsession I grew up around — my mother, a consummate cleaner and champion of order, used to follow me around with the vacuum cleaner, and was more than ready to wipe down every doorknob and light switch I touched in my travels.  She could not rest until everything was cleaned to her satisfaction.  As there were three children in the house, as well as three cats, and a dog who occasionally found himself inside (much to his chagrin), my mother did not rest often.

No, it's not an all consuming obsession.  I suppose it's more of a mild preoccupation that repeatedly bubbles up to the surface.  With the end of the job in sight, a sense that it's time to move on takes hold and quickly evolves into anticipation for the next project.

And so, over the weekend, I toiled away at the piece in an effort to put it to bed.  Though I wasn't completely successful, I got it to within easy striking distance and am now but fifteen minute's worth of work from it's completion. 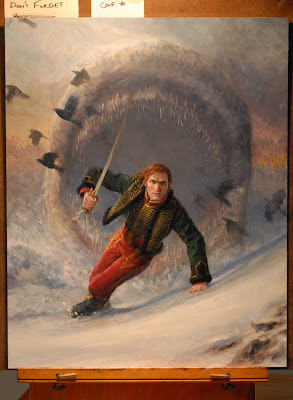 Day 10 found me tightening the worm a bit more, while darkening the overall value and killing the blue of the maw a bit.  I did another pass on the background and did some more work on the snow being plowed.  I also began to flip-flop on whether or not I wanted to keep the edge of the snowbank Valentine is leaning into all the way to the edge of the painting.  Day 9's post shows the edge disappearing, and I brought it back on Day 10.  I ended up thinking it was better on Day 9. 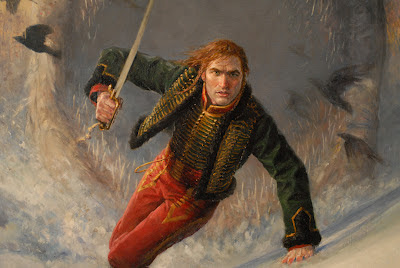 Day 10 wrapped up with me realizing that I had once again avoided making some major decisions.  How much of the worm's interior structure should I show?  How detailed should the worm's surface be?  The best way to answer these things was to fuss around with the piece in Photoshop.  I decided to take that task on the next morning.

Day 11 began with me sitting down at the computer to do some digital painting.  As I was about to plug in my tablet, I received an email from another illustrator about the piece.  Attached to the email was a digital paint over he'd done that addressed the very issues I was about to tackle.

Now, over the years, I have been reticent to show my work to my peers in progress or even to get crits from them after the fact.  I drifted in and out of several small clutches of illustrators with whom I shared my work, and always felt an unease about it.  I think the root of the problem was self-esteem related.  While I was brutally honest during critiques in college, and could take as good as I gave, there was a security blanket there in that it was okay to fail.  There were no real repercussions to falling short at something.  You just did better the next time.

After becoming a professional, I became more guarded.  For whatever reason, failure was something I began to fear.  I didn't like the idea that the lesser pieces were out there for all to see, and the last thing I wanted was to have one of my peers point them out to me.  In retrospect, I can see how I got to that thinking, but the fallacy of it is pretty obvious.  While there are some out there who will gloat about the work that came up short, for the most part my fellow illustrators were more than willing to help me.  And so, over the last year things have changed.  I have found a group of folks who I respect and trust and have somehow managed to keep pretty tight with them.  There was never some dramatic moment where we sat down around a table writing up bylaws and making formal declarations.  We just started consulting one another.  I'm not sure if it's made my work better or not but it's a pretty awesome security blanket, and the fact that one of them took it upon themselves to do a digital paint over on the Valentine piece for my benefit makes it clear how fortunate I am. 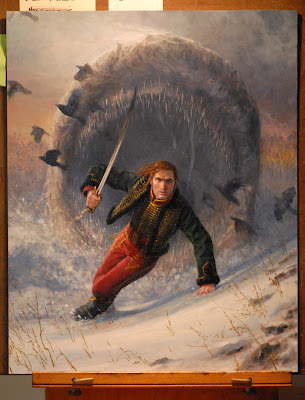 Paint over in hand, I began to systematically finish the painting.  I added the vaguest indication of the worm's throat, began to give form to the worm's skin, and added some saliva for good measure.  I made another pass on the sword, threw in some additional rocks, and finally started painting in the weeds poking through the snow.  The plowed snow, too, got another pass, all of the final steps became clear.  I just needed to commit and do them. 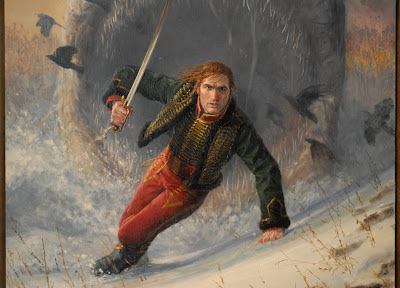 A note about the photographs.  Despite my attempts to color correct them, they've consistently skewed the painting's palette.  The blues all appear much grayer than in real life.  Part of this is to do with the light in the room, and part of this is to do with how I've got the camera set.  I suspect that once the piece is scanned it will be a bit of a surprise to some of you.  Or not.

I think I've got one more post left about the process, and then should have the finished piece for you all shortly thereafter.  In the meantime, I'm going to put the last 15 minutes into this thing, then get on to the next project.
Email ThisBlogThis!Share to TwitterShare to FacebookShare to Pinterest
Labels: Critique, Illustration, Oils, Process, Valentine