A dozen days into the festivities, I found myself at the very end.  My major decisions had all been made and it was time to cover what ground remained.  The laundry list looked like this:

1. The birds.  They were just vaguely blocked in and needed to be finalized.
2. The background.  I needed to decide on the intensity of those colors once and for all.
3. The weeds.  One more pass to solidify them.
4. The sword.  It needed another look in order to make sure I didn't lose the edge against the busyness of the worm.

One by one, I checked the items off. 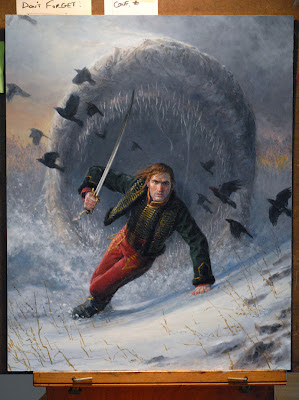 I have an annoying habit of actually resting my hand on the painting's surface from time to time.  When I work on canvas, I do this rarely as the give of the fabric reminds me not to, but the firm surface of paper on hardboard allows my often absent mind to have its way.  I know that maul sticks exist for this purpose, and on larger pieces I use one, but I've always found them to be too unwieldy for smaller work.  So, I've kind of just accepted that it's going to happen, and all I can do is mitigate the damage done.  In order to do this, and because I'm left-handed, I often work from right to left whenever possible.  And so, the birds were completed in keeping with that as you can see in the progress shot below. 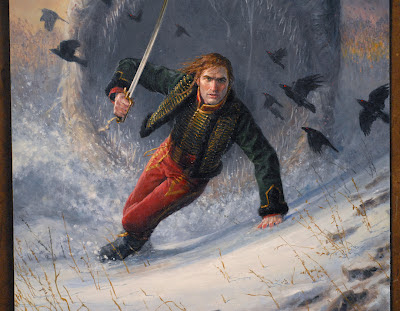 I continued in this fashion until I reached the sword.  At that point, I went ahead and dealt with the blade as necessary then returned to painting the birds.  In order to break up the monotony, of painting bird after bird, I did some more work on the weeds.  Once I'd managed to burn through that, I dutifully went back to painting birds until there were none left to paint.

At this point, I walked away from the piece.  I needed a bit of a breather and wanted to train my eyes on something else for a little while in order to come back to the painting with a fresher eye.  I watched a bit of television while doing thumbnail sketches for another job and pretended Valentine didn't exist for a stretch.  When I finally came back to the painting, I looked it over and quickly decided to gamble a bit with the sky color and boost its vibrancy.  I went with a glaze that consisted primarily of Indian Yellow and Magenta, with the thinking that if I didn't like it I could simply wipe it off.  Turns out I liked it, so it got to stay. 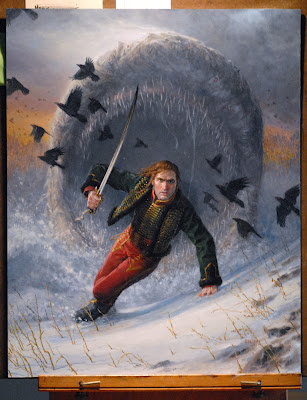 I photographed the piece, and emailed it to my cabal of illustrators to get their impressions.  I had the luxury of one more day and wanted their feedback.  I already had Amy's.  She felt the ill-advised bird in the upper left hand corner was... well, ill-advised.  You'll note when seeing the final that it is no longer there.  Happily, the other critiques came quickly thereafter and were either minor enough to address or ignore as necessary.  I agreed with all of the nits my friends chose to pick but only had time to address a few of them effectively given the issues of drying and the proximity of the deadline.  That's when I wrote yesterday's post.  And while the fifteen minutes of work I suggested it would take to complete the painting turned out to take a half hour, it was still completed and Valentine currently drying quietly in the corner.

As soon as the piece is scanned, color corrected, etc., I'll have it up here.  In the meantime, I'm going to get back to my scribbling.
Email ThisBlogThis!Share to TwitterShare to FacebookShare to Pinterest
Labels: Illustration, Oils, Process, Valentine